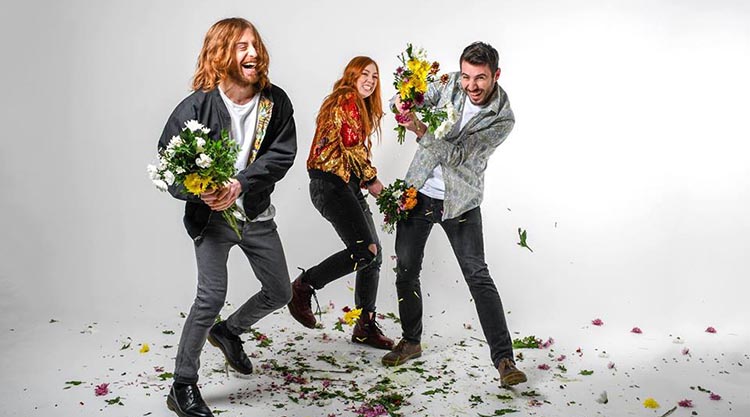 Following the pan-European success of their 2015 debut “All In Time”, 60,000 albums and millions of streams later, SHAKE SHAKE GO are back with their second album “HOMESICK” and new single “Come Back To Me”.

“Our songs are inspired by the stories and lives of the people closest to us, even though they are very far away,” says Welsh-born Poppy Jones, the band’s vocalist.

Poppy Jones, Virgile Rozand (guitar) & Kilian Saubusse (drums) met while attending London College of Music, and set out busking up and down the UK with their trademark high-energy drum lead performances, soon enough they found themselves touring across the continent playing their collection of indie-pop anthems supporting the likes of James Blunt and Rodrigo y Gabriela.

The release of their self-titled first EP “England Skies” marked a turning point in their fledgling career with a pan-European release, tens of millions of streams, and impressive chart results in 30 countries. Following on from the success of this EP the band entered the studio to record their debut album “All In Time”, released in January 2016 to critical acclaim.

In the words of the press, Shake Shake Go are “…the new sensation” (Madame Figaro), “…a huge blow to the heart” (Le Parisien), and “…blessed with a rare knack for melody” (Clash Magazine). After selling out the iconic Cigale in Paris, a 60 date tour followed ending in Tahiti before the band got back to work writing their second album.

Following the release of “All In Time” the band returned in September 2018 with its second album “HOMESICK” and new singles ‘Come Back to Me’ and ‘Dinosaur. From the first listen it is clear that their sound is more polished and mature while losing none of its catchy energy. An air of nostalgia floats throughout the album weaving together bitter-sweet memory and future optimism, expertly combined by the power of Poppy’s voice.