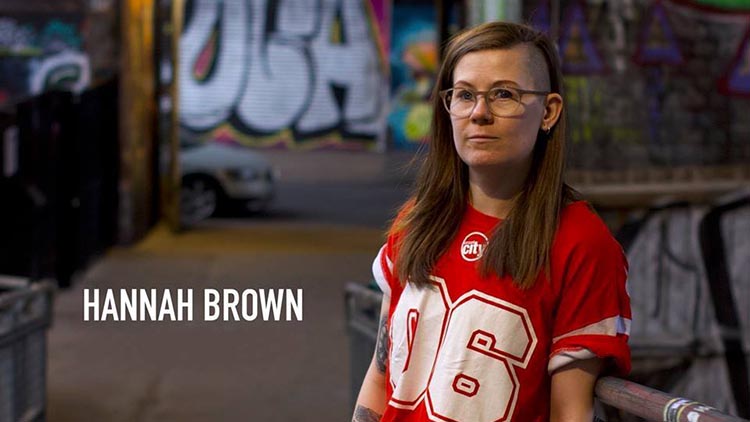 Originally from Nottingham, Hannah Brown made the journey across to the West Midlands in pursuit of her music. Since then, Hannah’s campaign has been a persistent one. From recording demos in her bedroom to playing headline shows, she has developed a faithful following of music lovers willing to have their hearts wrenched by sweet-yet-soulful vocals.

Whilst performing across the UK, Hannah has garnered support from BBC Introducing with radio play across the East and West Midlands. Following the release of Hannah’s first EP in 2015, recorded at the iconic Highbury Studios, she has gone on to work with producers Rob Derbyshire and Ben Stancombe. Her second EP – “Better For This” – showcases these collaborations whilst capturing a significant point in her young adulthood. Featuring songs of guilt, anxiety and self-acceptance, the record is tied together with a sense of bravery and melancholic hope.

2018 proved to be a turning point for Hannah both creatively and professionally, with the introduction of a bigger live setup that debuted in late July. Hannah’s first single with the band – “Further Away” – will be released in early 2019. The song features a more aggressive delivery than listeners are used to, with powerful guitars and an assured vocal to match. It comes as a response to the challenges faced by current society, particularly for young people in a restless Britain.

Consisting of Tom (vocals), Liz (guitar), Georgia (guitar), Immy (bass) and Becca (drums), Bad Bug was initially visualised at 5am by the Hell Stage at Glastonbury festival. Birthed in April 2018, the group have taken the North by storm, including a sold out self-organised show in Manchester, supporting Shonen Knife and Trampolene as part of This Feeling Alive tour at Brudenell Social Club, plus two rammed slots at Tramlines festival in Sheffield.

The band have played to audiences in Leeds, Manchester, Sheffield, Liverpool, Doncaster and Newcastle, to a brilliant reception. Their debut single ‘Bad News’ was played on Boogaloo radio and added to This Feeling ‘Best New Bands’ playlist and a mention on Radio X twitter, as well as receiving TOTD on GigSlutz and being put on the front cover of Denim + Leather magazine.

The Northern Riots are an explosive Leeds based band fusing heavy, guitar driven indie and an old school rock and roll vibe to create something truly original.

Watermark is a 4 pieces Indie-rock band.