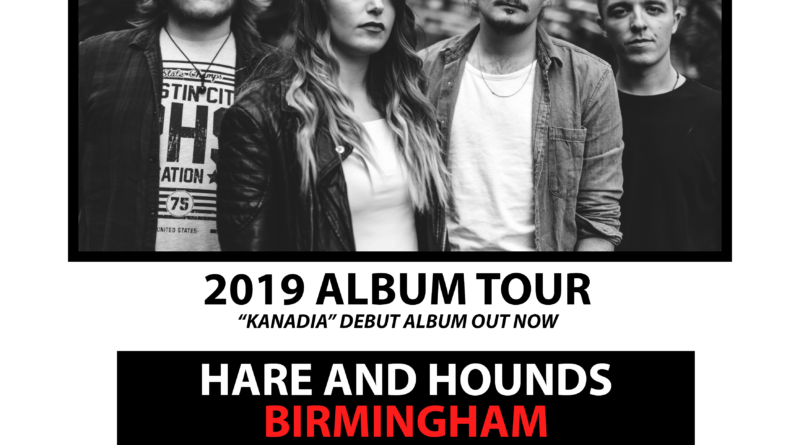 ‘gorgeously understated, precise but ambitious in scale, in the way Muse can be. They’re destined for stages and venues far larger than they’re currently playing’
– Nightshift Magazine

Kanadia at Hare and Hounds with support from The Silver Lines, Juniper Nights, Deaf Balloons as part of their 2019 UK Album Tour.

KANADIA are a 4-piece alternative rock band based in Oxford.

The band has begun to steadily build a dedicated fan base and an exciting reputation for their ‘stadium sized’ live shows.

Their debut self titled album was released on 2nd March, 2019 to a sold out launch show at O2 Academy Oxford on the same date. 5 singles from the album have been included on Spotify Editorial Playlists gaining up to 250,000 streams.

Though based in Oxford, KANADIA have started to attract a fan-base across the Atlantic, particularly in Mexico, USA, and Canada. Alongside many European countries such as Germany, France and Spain.

KANADIA have performed at Truck Fest 2018 on the Market Stage alongside PEACE, JAWS and Bad Sounds. They have also performed at Common People Festival, Cornbury Festival, Riverside, BBC Introducing, SoFar Sounds, O2 Academy Oxford and other venues include The Bullingdon, The Cellar, Jericho Tavern and Sunflower lounge to name a few.

The Silver Lines are a four piece rock ‘n’ roll band from the West Midlands formed in 2018. Drawing influences from late 60’s powerhouses, such as The Kinks and The Rolling Stones. Expect snarling vocals, bluesy riffs and swaggering tunes. Their “take no prisoners” first single Roamer was released in late 2018 and championed by Tom Robinson on BBC Radio 6. Their second single Parliament has just been released in February 2019 and was played by Huw Stephens on BBC Radio 1

James, Zach, and Tom previously performed together in the indie band ‘Pipeline’, with bassist Jason Rich. Jason and Zach were friends from university and found James and Tom online through a musician finding website. In February 2017, Jason moved to Sweden to pursue his career, and Marty took his place to complete the lineup. The band changed their name to Juniper Nights to reflect their change in lineup and darker sound.

Juniper Nights’ music is typically a combination of sombre and textural, juxtaposed with aggressive guitar riffs to create a dynamically varying sound. However, their musical style often varies significantly between songs, with dark undertones being the underlying theme. This sound is heavily influenced by a number of British rock bands such as Radiohead, Elbow, and Alt-J. Whilst their music is primarily guitar-based, they often experiment with other sounds, inspired by the works of trip hop and electronic artists such as Aphex Twin, Portishead, Massive Attack, and Unkle. This includes the use of keyboards, drum machines, and strings, as well as the manipulation of sound using effects.