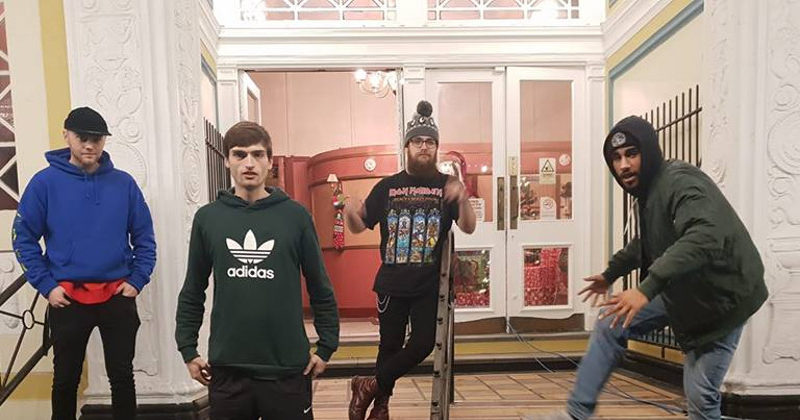 Location: Actress and Bishop
More info about the venue & events at the above link.

The Pagans- Shepherds of Humanity (S.O.H) are a five piece hailing from the Black Country in the West Midlands, a place often revered as the birthplace of raucous noise, given the musical heavyweights that have emerged from its industrial roots.

Whilst it would be impossible not to be influenced by the sounds of their fellow ‘yam-yam’ brothers, Black Sabbath and Led Zeppelin, they are passionate about the diverse cultures of both their city and indeed their own band members so they fuse elements of hip-hop/funk/punk/ska/metal/jazz/reggae to create a truly original vibe. In fact, with The Pagans S.O.H it’s more than just making music. It’s a voyage of discovery, exploring where the realms of innovative sound will take us – whilst at the same time completely smashing through the barriers of genre.
They are not just a collective, they are a Pagan family and they welcome you all to strap yourselves in and join us on the ride. The Pagans are here and The Pagans are alive!

“Anyone somehow deluded into thinking there’s nothing new or exciting among young bands in 2018 need to spend just a minute watching this lot. So full of life and potential…” Dave Haslam, Writer/Broadcaster/DJ

“Watching The Pagans S.O.H live is like going on the best magical, mystery tour. You don’t know where you are going or how you will get there, but it’s a great journey.” Pete Salisbury, Drummer (The Verve/The Charlatans)

“What the fuck?? This band hit the stage and bollocksed my head up. A total fusion of Red Hot Chilli Peppers, Rage Against The Machine, Dust Junkies – fuck me, they are great! Keep your ears open folks because they are special…” Wayne Carey, Louder than War

“The Pagans S.O.H are firm favourites of MAH. Not only are they genuinely exciting to watch, but they are always a pleasure to work with too. That’s a winner of a combination in this industry.” Emma Rule, Musicians Against Homelessness (MAH)

Watch the official music video for ‘BANANANAH’ below:

The Moods are a ten-piece collective of producers, poets and musicians from the Northwest of England. Combining drum & bass, reggae, hip-hop and dub-step, The Moods’ mighty music sparks off a contagious need to dance, underpinned, with real grit & substance. They are a band with plenty to say, singing and rapping with raw passion about the important stuff like war, famine, love, life and death. This is music for the head and the heart, “They will make you dance and then they’ll make you think”.

2018 was an unforgettable year for The Moods and their fans. The band wowed crowds in iconic venues up and down the country, adding legions of fans to The Moods’ family and have brought down the house at many festivals, sharing stages with the likes of Goldie, Ronnie Size, De La Soul, Dub Fx and Lowkey. They secured national radio airplay on BBC radio 6 for their summer single ‘Carnival’ and saw two of their tracks ‘Keep Your Powder Dry’ and ‘Kids Carry Guns’ hit the big screen when they featured on the soundtrack to British film ‘Strangeways Here We Come’.

After their first album ‘Missing Peace’ received critical success, being named album of the year for 2017 in The Morning Star, The Moods will be releasing their much anticipated follow up album in the spring of 2019 and this will be accompanied by their biggest UK tour to date. With European dates also on the horizon and numerous festival dates already confirmed, The Moods are ready to take their on-stage party far and wide.

Watch the official music video for ‘Carnival’ below: