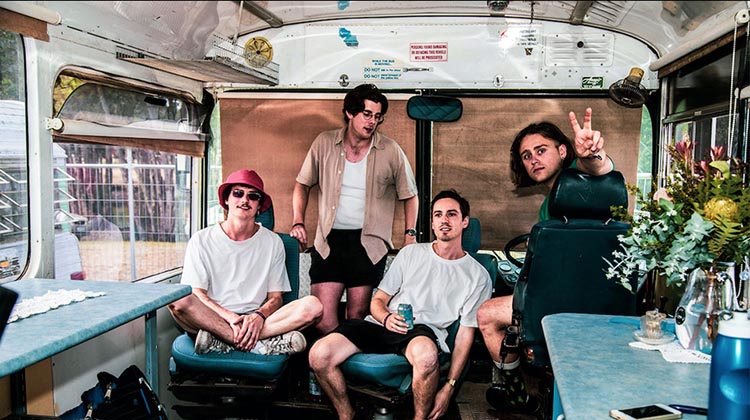 Sydney outfit PLANET is the culmination of several years of trial and error in songcraft, performance and production. They were first brought together by their shared love of music: old and new, foreign and domestic. Drawing influences from past and present the four-piece combine pop laden guitar hooks with soaring vocal melodies. The result is a sound which is reminiscent of Britpop but remains undeniably Australian.

Having signed with booking agents New World Artists in late 2016, PLANET kept themsleves busy playing a string of shows all over the country supporting British India and UK giants JAMES. They also made their debut on the Australian festival circuit securing slots at Festival of the Sun, Lost Paradise, Party in the Paddock, Blurst of Times. As proof of their ability to stand on their own merit, look no farther than their first ever interstate single tour. The boys played three shows in support of their most recent effort, ‘Aching Dream’. Starting with an intimate affair at The Foundry in Brisbane, the band headed down to Melbourne to play a rowdy post-midnight gig at Yah Yahs before bringing it all back home for a sold out show at The Chippo in Sydney. Over the course of this period the band have developed a tight and energetic live show which has on more than one occasion resulted in sweat drenched t-shirts and arm in arm sing-a-longs.

Showing no signs of slowing down, the boys have pushed forward through 2018 and are touring Australia’s East Coast in support of their recently debuted EP ‘Waking Eight’ in June.

While PLANET remains, for the most part, a staunchly independent labour of love – all songs being recorded in Matty Took’s bedroom studio – the band employed producer Lachlan Mitchell (Jezebels, Little Bastard) to add his touch to their past singles as well as their upcoming debut EP. Dave Ruby Howe of Triple J has said of the band, “Every song feels like a step forward for them to the point now that they’re 10 paces out in front.”

The Estevans, a captivating four piece indie-rock band from Guildford, England, led by songwriter Guy Ferris and frontman Oscar Pugin who started collaborating musically in late 2014. The pair were in several bands together before uniting with drummer Ollie Thomas and bassist Morgan Jones who they met at college in late 2016. The boys quickly started getting as many gigs under their belt as possible at local venues, pubs and festivals playing original material. Ferris who is the band’s primary songwriter grew up listening religiously to The Beatleswhich hugely influenced his songwriting and fuelled his passion for music, meaning that naturally The Beatles are in mind with every song he writes and are therefore the foundation of the band’s songs.

The Libertines, The Strokes, Arctic Monkeys and Oasis are artists that the band take huge influence from and are the main inspiration for the riff based, energetic, youthful, raw sound that The Estevans have.

Recording project/band based between Coventry and Ireland, Past Lives are about to release their first EP.