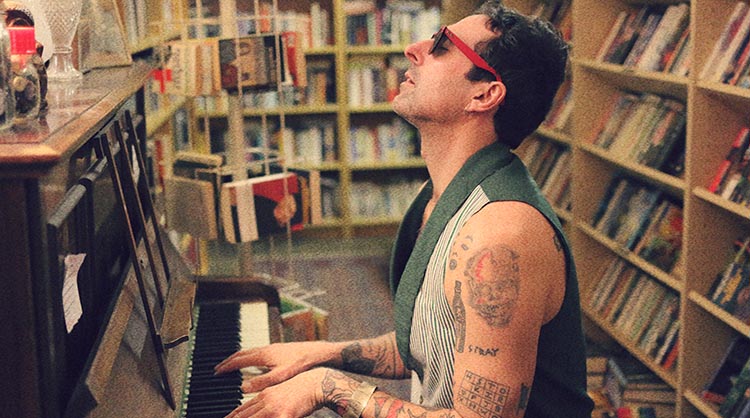 Born in Essex, Scott Lavene was raised on power ballads, punk and swearing. In bands since his teens, scratching out a pound note on with dead end jobs in various towns. Always moving, sunny side down, trying to find something to cling to. In London during the late noughties, the behavior became darker, the songs got better and there came a sniff from some major labels and a stint in New York including playing at CBGB’s.

There followed a mental breakdown and an escape from society for six years. No more music, very little hope of returning to reality.

After six months in a House for the Bewildered and a move to the coast a new batch of songs emerged and Scott played for the first time in seven years. The new songs pricked up some ears, which led to recording an album financed by selling most of his possessions. One of the singles became ‘Record of The Week’ on Geoff Lloyds Absolute Radio show and the hope and belief was back.

Now, Scott is solo with some tales to tell, and a smashing collection of twisted pop songs with nods to Ian Dury, Squeeze, Tom Waits, Talking Heads, John Grant and Father John Misty. A new series of singles will be released in 2018.

Welcome to The NU. The futuristic music project has ambitions to reach NU heights, creating pumping soundscapes for the 21st century; The NU combines the electric atmosphere of the dance world and the raw energy of rock n roll to pioneer a NU approach to music. Drawing inspiration from acts such as INXS, Crystal Castles and Janes Addiction, expect future releases to dive into countless spectrums of euphoria that has every intention of sparking that increasingly precious goose bump feeling.

Receiving radio plays from BBC Introducing In the West Midlands and smashing shows around the UK including a Headline set at BIMM Birmingham’s end of term showcase at The Castle and Falcon, The NU is definitely one to watch in 2019.